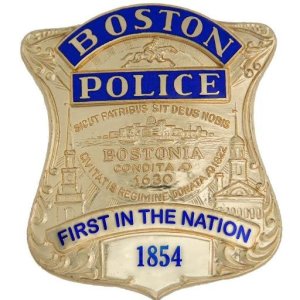 On May 20th, Dorchester and the City of Boston lost one of its finest officer’s to ever wear the badge.  Francis “Frank” P. Walsh, married to Catherine A. (Mealey) Walsh, both of Mission Hill and were just one week away from 61 years of marriage. Frank was the son of Martin J. Walsh of Kara Keli, Ireland and Lena (Slavin) Walsh of Drunkeerin, Ireland.  Frank was the 2nd of four children. His older brother, Martin Walsh, and his wife Denyse of Nashua NH, the late Eleanor Shaffer, and her late husband, James of Hull, and the late Bernadette O’Malley and her late husband, James of Walpole.  Frank, is the father of Michael, and his wife Linda of Westwood, Cam (Reese) Walsh of Quincy, Carolyn Kain, and her husband, Jack of Dorchester, and John “Jack” Walsh, and his wife, Emily, of Milton (formerly Pocatello, Idaho).  He was the grandfather of 13 children and two great-grandchildren.

Frank was a retired Boston Police officer who started his career in C-11 and then A-1 and retired twenty years ago as the Senior response officer, assisting and caring for the elderly victims of theft and crimes.  He was known to many as a “cop’s cop” and spent many hours mentoring young cadets and teaching them how to gain the trust of the public, with honesty and integrity.  Over his career, he received several citations for his service and excellent police work.

In his retirement years, Frank was an avid golfer, known for his generosity and great wit.  He played at golf courses all over the world and love spending time with his fellow officers, both on and off the course.  Retirement included yearly trips to Myrtle Beach, Florida and even included a two month long stays in Australia.  He enjoyed many, many friends at his favorite hang-out, the Erie Pub, where he was known to visit on occasion.   His last trip was in March 2021, when he visited Florida, during the height of Covid where he stayed with several buddies from the BPD.  This would be his last trip, but one he truly enjoyed.

Frank was also known as an avid shopper and during a period of illness, it was believed that his inability to shop caused the closing of Filene’s Basement.  Now, it is believed with his passing, “Savers” may also suffer the same fate.  Ties will no longer be handed out by Fran so if you have one, treasure it in memory of Frank,

Frank was a grandfather who took pride in his family and great achievements of his grandchildren.  “Papa” was always glad to see them and always asked “How is school?” and later “How is the car running?” and now, “How’s the job?”.

Cathy, his wife of 60+ years, took great care of their family home until he was too sick to stay home and eventually passed.  If you can pay your respects, please join his family and friends at:

To send flowers to the family, please visit our floral store.